A violinist using guitar as therapy.. not a bad idear, eh? This place is where I keep my music - the things I've written and my adventures in teaching myself how to record. If you have any comments on how I could improve or what your impressions are, just holler in my guestbook.. Thanks for stopping by! 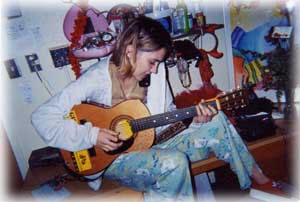 the first attempt - Ready - by Reva Kuzmich, recorded with Acid Pro 4.0 and edited with Sound Forge 6.0

have a nice day!